Clans of Scotlland: The Kerrs

Clans of Scotlland: The Kerrs 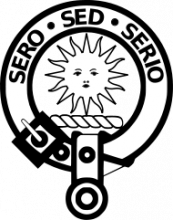 In Scotland, the term “clan” was not only applied to the Gaelic kinship groups of the Highlands, but to a similar yet distinct society that developed along the Anglo-Scottish border. This was the culture of the Border reivers or “raiders,” and the outlaw families that thrived along the border were known at the time as “clans” just as surely as their equivalents up north.

One of these “riding clans” as they are known, was Clan Kerr, hereditary enemies of Clan Scott. The Kerrs were known for a peculiar characteristic that gave many of them an advantage in battle- an unusual number of them were left-handed, or as it is known in Scotland, “Kerr-fisted.”

Because most people are right-handed, the typical swordsman is only accustomed to fighting other right-handers. Lefties, on the other hand, would usually end up fighting with a rightie. The natural result is that left-handed swordsmen are usually more comfortable fighting righties than righties are fighting them.

The Kerrs seemed to produce an especially large number of left-handed men, and they soon realized it gave them an advantage. So, according to legend at least, they taught even the right-handed members of their clan how to fence left-handed, and designed their castle with a spiral staircase going the “wrong way”- so as to inconvenience righties trying to storm it while making the fight easier for the Kerr-fisted defenders. It's not known how much of this story is literally true, but like any great story, it doesn't have to be- it's more fun the way it is!


Clans of Scotland: The Campbells


Clans of Scotland: The MacDonalds