Clans of Scotland: The MacGregors

Clans of Scotland: The MacGregors 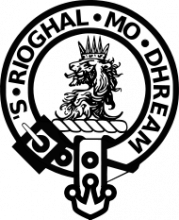 “It was ordained that the name of MacGregor should be abolished and that the whole persons of that name should renounce their name and take some other name and that they nor none of their name and that they nor none of their posterity should call themselves Gregor or MacGregor under pain of death .... that any person or persons of the said clan who has already renounced their names or hereafter shall renounce their names or if any of their children or posterity shall at any time hereafter assume or take to themselves the name of Gregor or MacGregor .... that every such person or persons assuming or taking to themselves the said name .... shall incurr the pain of death which pain shall be executed upon them without favour.”

This is a quote from an Act of the Scottish Parliament in 1617, banning the use of the name MacGregor on penalty of death. This would be the only known historical example of a government attempting to commit genocide upon a single family, if not for the similar case of the Glencoe MacDonalds.

The MacGregors were a warlike and very proud clan on the Highland/Lowland border, and for quite some time they had thrived by charging their Lowland neighbors to not have their cattle stolen. While this would be seen as gangsterism in modern terms, the lack of an effective central government responsive to Gaelic needs had left every clan to fend for itself in order to survive, and most clans engaged in similar activities.

The misfortune of the MacGregors was to be particularly good at it, with the result that most Lowlanders considered them a tribe of thieves. When a couple of merchants named MacGregor were hung out of sheer malice by the Colquhouns, the MacGregors invaded their territory and routed their army. A single MacGregor had been left to guard some local students in order to keep them safe from the battle. Unknown to the MacGregor chief, the man was a psychopath, and he simply murdered all of the students so he could go join the fight. The resulting outrage led to the banning of the MacGregor name- and to more than a century of persecution.

MacGregors were driven off their lands and hunted with dogs, then murdered for the bounty on their heads. Most of them adopted pseudonyms in order to avoid being killed, but many of them retreated into outright banditry. The famous swordsman and outlaw Rob Roy MacGregor actually lived most of his life as “Robert Campbell” because of these laws, which is why his gravestone bears the inscription “MacGregor Despite Them.”


Clans of Scotland: The MacDonalds


The Battle of Harlaw