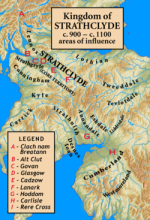 Ancient Scotland was part of the Celtic world, but there were distinctly different Celtic cultures within it- the Gaels, the Picts and the Britons. The Gaels and the Picts get a lot of the attention, but the Britons of what is now southern Scotland were every bit as “Celtic,” as their language of Cumbric was in the P-Celtic branch of the Celtic language family.

Cumbric was essentially a dialect of Old Welsh, and the culture of these Scottish Britons was part of what we would now think of as ancient Welsh culture. Merlin and Arthur featured heavily in their legends, and the Old Welsh poem “Y Gododdin” describes a battle in what is now Scotland. Their kingdom was known as Strathclyde or Cumbria, and in the early middle ages it was under constant pressure from both north and south. The invading Anglo-Saxons threatened its territories in what is now northern England, while the Gaels of the Highlands pushed down from the north.

When Cumbria fell at last, it was to the Gaels, and Cumbria became part of the new Kingdom of Scotland. Some families retained an awareness of their original identity as Strathclyde Britons even when they drifted northward over time and developed into Highland clans. The name “Galbraith” literally means “a foreign Briton,” while the MacArthur clan claims descent from King Arthur himself. The mighty Clan Campbell claimed descent from the Gaelic warrior hero Diarmaid, but also from the Strathclyde Britons. Even though the Scottish Britons eventually disappeared as a distinct culture, these clans preserved at least a hint of what once was.


Scotland Before The Clans