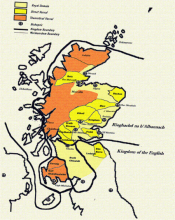 A cinneal was like a clan, but smaller- it didn't refer to all of the people of a territory but just to the ruling family of that territory. “Clans” as we would now define them had not yet developed. Over centuries of warfare as well as more peaceful interactions with the neighboring Picts, the Scot eventually merged with them. The new Gaelic kingdom was known as Alba, or “Scotland.”

Because Alba was not conceived of as a land of many regional tuath, each with its own king, there could be no institution analogous to the Irish “high kingship.” Instead, there was only one king in Alba- the King of Scots- and powerful local magnates were referred to as “mormaers”. A mormaer was essentially a regional king without the title, and a mormaership was something like a tuath, but without as much shared identity. The different cinneal or kinship groups within a mormaership did not think of themselves as being members of the same tribe or “tuath” except insofar as they were all Scots. Over time, the common inhabitants of the district ruled over by a particular cinneal began to think of themselves as the children or “clann” of that ruling family, especially because they were often related to the ruling family, however distantly. As this sense of shared kinship grew, the early cinneal became the clans.