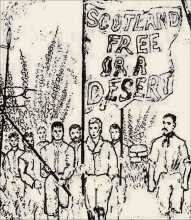 The use of “agent provocateurs” is an ancient tactic, used by governments all over the world to defuse or defeat both potential terrorist groups and genuine popular uprisings. The distinguishing feature of the agent provocateur is that he doesn't just gather information and pass it on to the authorities. Instead, he infiltrates or even creates radical organizations in order to try to talk potential radicals into breaking the law so that they can be arrested or killed.

The “Radical War” of 1820 was a tragic example of the use of this tactic. “Radical,” at the time, did not mean “communist” or anything like that. Radicals merely believed in democratic government, and that people who didn't own property should be able to vote. Often, they also supported the rights of workers to form labor unions. Overall, the Radicals of 1820 held political positions that would not be seen as very radical today. Nevertheless, they were viewed with fear and loathing by the authorities of the time, who sent in provocateurs to try to deliberately provoke a violent uprising for the sole purpose of giving them an excuse to crush the Radical movement in Scotland.

The false Radicals succeeded in talking the genuine Radicals into believing that a mass uprising had successfully been organized in both England and Scotland, with the goal of achieving universal suffrage (in other words, voting rights), a more democratic Parliament with less power for the aristocracy, and possibly a restoration of Scottish independence.

There was actually no such mass uprising in the works, and the authorities knew exactly what the Radicals were going to do because they had effectively planned and organized the rebellion themselves. When it actually occurred, they were easily able to crush it and to capture the leaders, effectively destroying the Radical movement. The uprising of 1820 was all but forgotten until just a few years ago, when Scottish National Party politicians arranged to have monuments erected in memory of the men now known as the “Martyrs of 1820.”