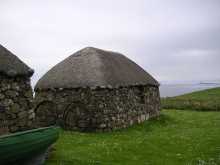 The Crofter's War is the name historians often give to the civil disturbances of the 1880s in the Scottish Hebrides, where the local people finally began to use force to resist the Clearances. One interesting point about the Crofter's War is that it was expressed in terms specific to Gaelic culture and history. When policemen threatened to enforce an eviction, the crofters would send the fiery cross around the island, the same method that had been used by their ancestors two centuries before that to gather for a clan fight or a Jacobite uprising.

Once the crofters had assembled, they were sometimes led into battle by bagpipers, and the crofter's most typical weapon was the cudgel or bludgeon, a thick piece of wood. Back in the clan era the “tuatha-ceatharnach” or “armed peasantry” were the militia of the clan, lower in rank than the sword-wielding gentlemen but still expected to help defend the clan against raiders from rival clans. The most typical weapon of the tuatha-ceatharnach was the cudgel.

One big difference between the Crofter's War and earlier Highland uprisings was the issue of class. In earlier rebellions, the chief and his gentleman retainers led the armed peasantry into battle, but the Crofter's War often pitted the peasantry against the chief, who was seen as having turned his back on the people. Another big difference was the role of women. There were, generally speaking, no women warriors among the old clans, but in the new battles between crofters and policemen women took a prominent role. In fact, it was sometimes noted that the women were fiercer fighters than the men, and more willing to openly defy authority!