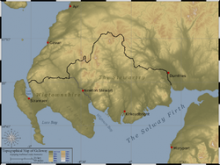 The most significant of these Gaelic holdouts was the area known as Galloway. This region of southwestern Scotland was initially peopled by speakers of Cumbric, a language closely related to Welsh. It became a Gaelic region between the ninth and eleventh centuries, then acquired a Gaelic-Norse aristocracy due to the Viking raids. Galloway was an independent kingdom for a time, but was then absorbed into the kingdom of Scotland, slowly losing its Gaelic identity.

Nevertheless, its identity still remained firmly Gaelic for a very long time. We know this because of legal documents referring to “kenkynol” (Gaelic “ceann-cinneil,” the head or chief of a kinship group, in other words a “clan chief”) “kenelman” (a Gaelic-English hybrid word, meaning roughly a “clansman”), and specific Galloway clans such as the Kennedys, MacLellans and MacDowalls.

Place names also indicate that the traditional Gaelic intellectual class of bards and reciters was active in medieval Galloway. With clans, clan chiefs and bards, Galloway in the Middle Ages seems to have been just as Gaelic as Ireland or the Hebrides. Gallowegian warriors were active in the struggle for Scottish Independence, and the forces of William Wallace were said to be largely from this area. All things considered, Galloway seems like a fascinating “lost chapter” in the history of Gaelic Scotland.